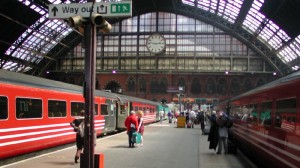 When I started the novel writing element of my MA at Sheffield Hallam I hadn’t decided on a subject for the book. I only knew that I wanted to do something completely different from anything I’d done before. In common with many writers I have a ‘sandpile’ –people give it different names but in essence it’s a file, folder or just a drawer full of jotted ideas, articles and press cuttings. Things that have caught our attention but which don’t fit into the piece we’re working on at the moment, things we want to go back to at some stage.

Everyone else in my group had decided on their theme and time was moving on. So I did what I always do, went through the sandpile. I found some notes I’d scribbled years before, about the Kings Cross tube fire. The train for Sheffield leaves from London’s St Pancras station, which is adjacent to King’s Cross. This plus the sheer romance of the old Midland Grand Hotel inspired me. (The building was by then called St Pancras Chambers and had yet to be restored – the shiny new St Pancras International Station and the posh hotel and loft appartments were still some years ahead.)

I went to the British Library’s newspaper archive and to the main library too and read everything I could find about it, including the Fennell report into the causes of the fire.  I discovered that the fire was yet another example of corporate negligence. This is something that both interests me and enrages me. I’m all to well aware of the devastating effects a culture of negligence can have on individuals and families, with the people in the firing line often blamed for something that eminates from the boardroom. I also discovered that apart from the many life changing injuries, the fire killed 31 people and that one poor person was still unidentified (he remained unidentified for a further seventeen years). That was the starting point.

During our train journey up to Sheffield, we often discussed our writing, exchanged ideas, tried out plots on one another. I told the group about the fire and the unidentified person, at which one of my friends remarked that she had always thought that the unidentified man was an ethereal spirit, not flesh and blood at all. It was a wonderful concept and it became my starting point.

That was how Fabriel was born. Then some magical things happened – the baby just arrived and the baby led to Alice and so on. Mr Aitchison appeared briefly early on, though I had a feeling that he’d play a larger role, which he did. Later, as I was trying to get to grips with Fabriel’s character, Mr Aitchison suddenly took on more importance. Fabriel’s status changed several times during the writing, but Alice’s character was set from the beginning.. The elemental also came out of the blue. As the work progressed, the fire became simply the catalyst, with the story of Fabriel and Alice going somewhere else entirely.

2 thoughts on “How it all began”