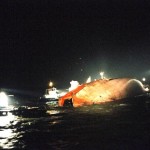 The Sixth of March, which is to be published a bit later than The Eighteenth of November also takes as its subject another avoidable disaster. The sinking of MV The Herald of Free Enterprise on the night of 6th March, 1987. A tragedy caused once more by negligence and where, if anything, the ‘disease of sloppiness’ was even easier to trace back to the boardroom. The book tells the story of Ben, who as a small child, experiences the trauma of the shipwreck and the loss of his family.