“Money is the root of all evil.”

The original phrase is found in the New Testament in Paul’s first epistle to Timothy*.

It actually says: “For the love of money is the root of all kinds of evil.”

So that’s all right then. You can be both good and rich. 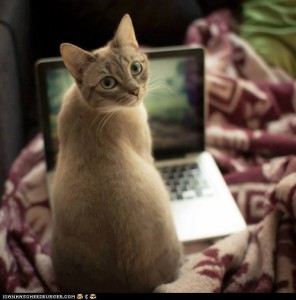 Writing is mostly a solitary occupation. Even if you are writing with a cat on your lap, it’s still down to you to get the words onto the paper or the screen. The cat’s not going to do it. But it sure as hell will provide a distraction, whether it’s actually sitting on the keyboard or not. There are plenty of ways you can happily waste time with a cat – whether it’s a real cat or a virtual cat. And it’s not just cats …

Before you even start, tackle the technology. While we curse it and say how much time it wastes, it’s not it. It’s us. Your computer hasn’t got teeth. It’s not going to bite if you don’t look at your emails (though of course it can get back to you in other sneaky ways). So first, turn of the bling or ping or whatever noise your computer makes when an email comes in. If, like me, you also have a distracting little box that appears top right, see if you can kill it. You may not be able to do so, but you can try.

Step away from the phone

And then there’s the phone. Once you’ve set a writing time – I write best in the mornings – don’t answer the phone. There are such things as answering machines. And don’t fret; if it’s urgent they’ll ring back. Even better, tell all your friends, your mother, the cat, the dog, your neighbour that you never answer the phone between, for instance, eight and twelve a.m. Be specific. If you are someone who just has to answer, then unplug the wretched thing, if it’s a landline. With mobiles, turn off the sound but shove it away somewhere. Like in a drawer, on top of the fridge. Anywhere where you can’t see it. (Only don’t forget where you put it!)

The devil incarnate – a.k.a. the Internet

Looking for inspiration – always a good excuse – I decided to do some ‘research’ for this post. So I Googled and found much more than even I had bargained for. Just one of the suggestions offered had no less than thirty five new ways to waste time or to find inspiration, if you prefer to think of it that way. That’s the delight and the curse of the web. A true double-edged sword. But I wouldn’t be without it. Nevertheless, it is madly distracting so, if possible, restrict your ‘research’ to evenings.

How many cups of tea does it take to write a novel?

We’ve all been there. You’re a bit stuck. A bit bored maybe. “I’ll just go and make a cup of tea.” Or maybe it’s coffee. Whatever. It’s still a distraction. It can bugger up your chain of thought, even if you weren’t aware of having a train of thought at that particular moment. When you are writing it’s essential that you keep your bum on the seat. Even if that means spending hours staring at the screen. It sounds weird, but by some sort of strange alchemy if you just stay there, something happens. Eventually. (You don’t have to remain immobile all the time, some pacing and stretching is allowed. And the occasional cup of tea.)

Rules are meant to be broken

The thing people often forget to say is that you need to know the rules before you can break them. There’s not a lot of fun in breaking a rule if you don’t know you are breaking it. And there are of course exceptions to any rule, provided you know it in the first place. And as I’ve said before, it’s probably better to make a cup tea or get a coffee than put something in the Google search bar. A cup of tea might take ten minutes. Make that fatal click and you’ll be there for hours. Trust me. I’m a writer.